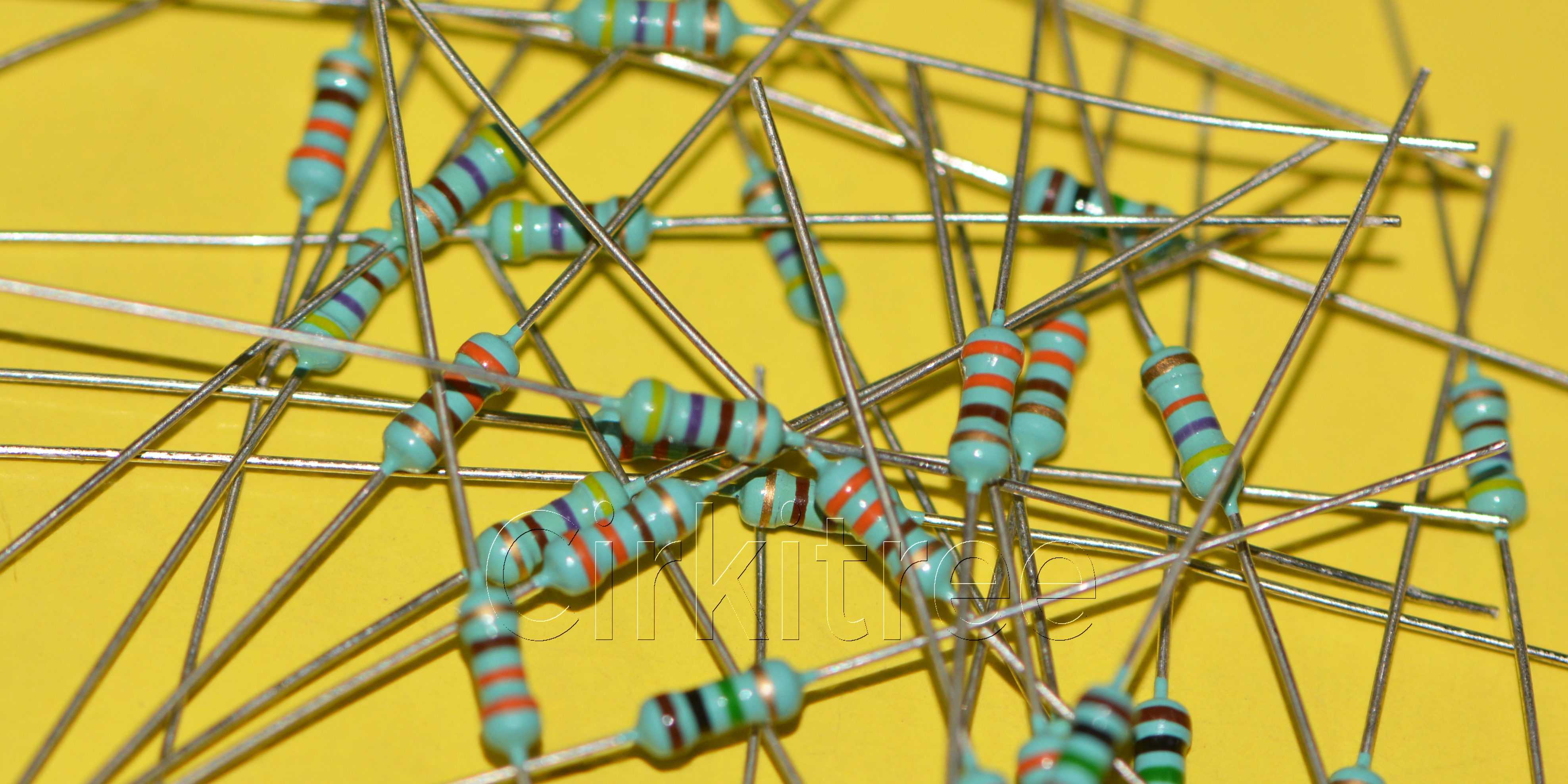 They are present in almost every circuit and you will also find this in Ohm’s law. To know what is Ohm’s law click here

In simple words, resistors are materials which have resistance. They control the amount of current flowing in a circuit.

What makes up a Resistor

Most common resistors are made up of alloys and carbon.

Resistor in a circuit

A resistor has two terminals(legs). In circuit, they are represented by zig-zag lines. The terminals of the resistor are each of the lines coming out from the zig-zag shaped lines. These lines connect to the rest of the circuit.

Symbol for a resistor

Here is a circuit in which you can see many resistors, each resistor is named as R followed by a number(which are sequential) and the value of the resistor is also written with the resistor.

Resistors have a fixed value of resistance which never changes.[Link to Ohm’s Law].

Their job is to control the amount of current flowing in a circuit. They control current by converting some power into heat. This heat is released out of the circuit.

The resistance of a resistor is measured in ohms.

The symbol for an ohm is Ω.

How to use resistors

If you want to keep any component safe in your circuit. If you want to prevent it from burning out. Take a resistor. Connect one end of resistor to the positive terminal of battery. Connect the other end to the component’s terminal. This is the most basic way in which you can connect the resistor.

Do you know that batteries have polarity. They have a positive(+ve) terminal and a negative (-ve) terminal. But resistors don’t have any polarity. You are free to connect any end of a resistor to another component’s +ve or -ve terminal.

Ways in which you can connect resistors

When connected in series resistor values simply add up.

Calculating the total resistance when resistors are connected in parallel is not easy but you can do it…this is how.

The total resistance of all the resistors connected in parallel is the inverse of the sum of all inverse resistances.

There are many types of resistors are available in the market, such as:

How to purchase resistors?

You don’t need to worry about the types of resistors you choose. Metal film resistors are widely used these days and they can be a perfect choice for your hobby project.

You have to take care about the following parameters before choosing a resistor.

1. Value of a resistor

How will you decide what value of resistor you have to buy? This question is easy to solve. Just look carefully at the circuit diagram that you are making and you can see the value of resistor written there. The values will be written like this-

Note the value of each of the resistor in your circuit.

So, you have to choose resistors with very less tolerance like 1%(Brown), 2%(Red) and 5%(Gold). The tolerances of 10%(Silver) and 20%(No colour) are large and should be avoided while buying a resistance. Large tolerances mean you cannot depend on your resistors(used in circuit), as their values can vary too much in practical.

To understand what is power handling capacity of a resistor, you can do a simple activity. For this activity you need –

0.25 Watt rated resistors are small in size, like this

You must be surprised, how can this happen!!

Let us do some maths to get the answer.

Power is amount of energy transferred per unit time. So, you can see that 4.5 watt power is given to a resistor rated with 0.25 watt. So much energy is passing through a small resistor. This is the reason it becomes too much hot.

Here is an image of resistors with different power ratings.

You can observe the difference in sizes of these resistors.

3. There are some resistors whose resistance changes with the amount of light falling on them. They are called photoresistors.

Getting started with soldering
July 17, 2018